The electronic smoking devices, also known as e-cigarette has started a new trend among teenagers in Singapore, gaining it’s popularity of its ease to access and without the need to undergo checks for legal age requirements.

These e-cigarettes or vaporisers an e-liquids can be purchased from online marketplace like Carousell, Gumtree and Qoo10, as well as social media like Instagram and Singapore-based online forums.

Related: Fines For Selling Cigarettes To Youth Under 18 Years Old

Singapore government has banned the use or importation of these electronic cigarettes, cigars and pipes. While according to the Health Sciences Authority (HSA), there were more than 15,000 cases involving people bringing vaporisers into Singapore illegally between 2012 and September 2015. In the same period, 39 peddlers were caught for selling vaporisers in Singapore.HSA said the vaporisers were found in parcels, most purchased online and on people caught hand carrying into Singapore.

What is the Fines / Penalties ?

The Tobacco (Control of Advertisements and Sale) Act in Singapore prohibits the importation, distribution, sale or offer for sales of any item designed to resemble a tobacco product, including vaporisers. Thus, buying these vaporisers or e-cigarettes from overseas websites or hand carrying in hand luggage is also considered as importing.

Vaporisers May Cause Health Hazards

Though the invention of the vaporisers were to aid smokers from getting a puff out of a cigarette, but there are concerns raised on the reliability and usability of these electronic devices.

Dr Wong Seng Weng, medical director of The Cancer Centre, said these e-cigarettes users are exposed to nicotine, which is addictive, as well as heated and aerosolised propylene glycol and glycerol, which may turn into carcinogens. Carcinogen is a substance that has cancer-causing agents and toxicants, in same cases, as much as those in conventional cigarettes.

In addition, there are also cases that e-cigarette explodes and caused bodily injury to the users. You may want to check out the man in Kentucky, US that suffered second-degree burns after his faulty e-cigarette set his trousers on fire.

After all, there are still no in-depth studies that e-cigarette could be as smoking-cessation aids and the industry safety standards for manufacturing such devices are not being laid out and widely accepted by countries.

Quitting Smoking Once and For All ?

If you are looking at some help for quit smoking, you may join the iQuit Club in Singapore.

A 38 year-old man was fined on 22nd Jan 2015 for repeatedly flicking cigarettes butts out of his flats. He was fined $600 per charge for 33 charges and sentenced to five hours of Corrective Work Order (CWO) for one charge. This was the highest fine meted out for high-rise littering to date.

He was caught after National Environment Agency (NEA) deployed a surveillance camera in between November 2014 and March 2014, which captured images of him throwing cigarette butts out of his windows 34 times. The NEA has received five complaints earlier on about high-rise littering at Block 224C Compassvale Walk over a period of 12 months beginning in June 2013 which though town councils and grassroots organisation serving the area reach out to residents to educate them but the problem persisted.

In 2014, NEA deployed cameras at close to 600 such locations and took 206 enforcement actions including fines and CWOs against offenders caught on action.

Heavier Penalties For Offenders (Revised in 2014)

Environmental Public Health Act amended the law in 2014, doubling the maximum penalty for littering-related offences to S$2,000 for first time offenders. Fines were also increase to $4,000 for second time offenders and S$10,000 for third and subsequent convictions.

One of the popular questions among tourist to Singapore, “No chewing gum in Singapore ?” It might not be surprising to Singapore as the banned has been implemented more than two decades back.

What could have prompt the government to take such extreme measures ? That was because of the increasing inconsiderate people eating chewing gum, spitting and sticking them almost everywhere. It has been such a big hassle to clean up chewing gums stain left on the streets floors, public transport seats and other areas. Cleaning costs for clearing the chewing gums are getting enormous and Singapore, trying to portray itself as a clean and green country, banned chewing gum which came into effect in 1992.

Related: Fines In Singapore For Spitting In Public

The law prohibits the personal use of chewing gum and also any kinds of way to bring the gum into Singapore. However, the government loosen the ban in 2004, where chewing gum of therapeutic value was allowed in Singapore under United-States-Singapore Free Trade Agreement.

Related: Corrective Work Order And Fines For Littering In Public

Under the law, no gum is allowed to be bought or sold inside Singapore and there is a $500 fine for spitting out gum on the streets. 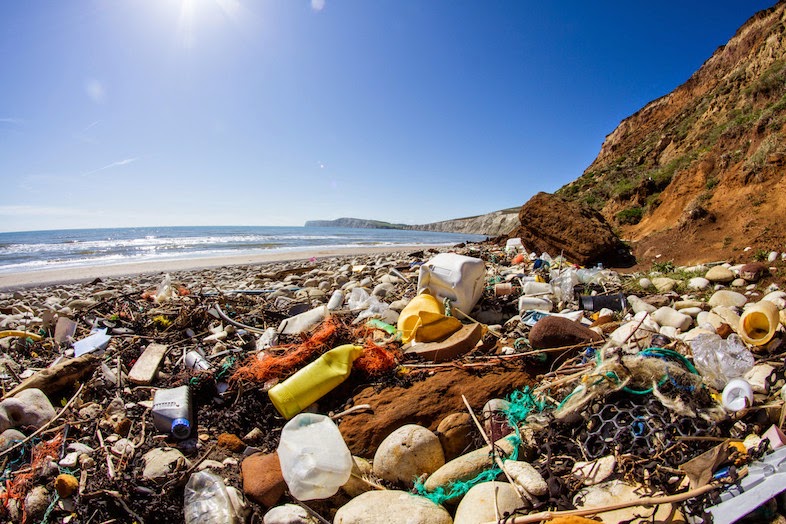 Singapore has a very good reputation as a clean and green city and this cannot be achieve without strict enforcement on littering. While getting a fine is just part of the penalty, the government have passed down laws to tackle these litterbugs by hurting their pride as well. By just casual throwing rubbish onto the ground in the public, not only you could be fined $300 as a first time offender, you may also face a court hearing which earn you a “chance” for public cleaning. That is the Corrective Work Order.

Corrective Work Order was first introduced in November 1992 to reform litterbugs. This act was considered as a form of counseling, reflecting to them the hardship cleaners faced while cleaning up the public places. Litterbugs would be required to accomphlish a certain amount of service hours picking up rubbish in public places. To make things worse, offenders are required to wear a bright orange jersey, identifying themselves as the litterbugs while cleaning up the areas. This bring shame to them and hopes that they would not repeat their acts again.

To tackle litterbugs rising in recent years, the Environmental Public Health Act has been amended to discourage those that behave irresponsibly. The courtroom fines for littering offenders was doubled since April 2014 to $2,000 for first offence, $4,,000 for second offence and $10,000 for third and subsequent offences. 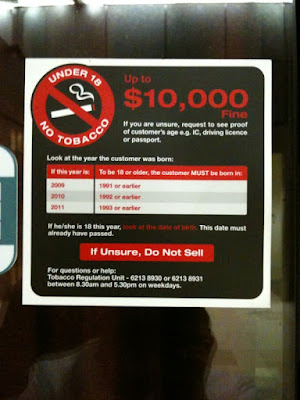 This is one of the signs which are being displayed outside a pub in Suntec City. Don’t take it as just a warning because I have heard of coffeeshop owners being fined thousands of dollars just because they failed to check their customer’s identity card and got caught. 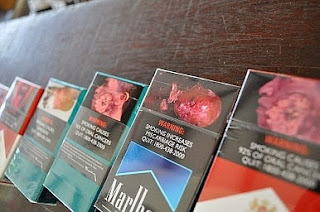 While the cost of cigarettes in Singapore has been soaring over the years, most of the Singaporeans has make use of overseas trip or a trip to Johor Bahru to bring back some non-duty paid cigarettes into Singapore for consumption.

Beware, however, it was an dangerous act as these smokers are not aware of the strict law in Singapore. Trying to bring in more than one packet of cigarettes (which must be an open pack) through the Singapore customs constitute a fine penalty, either you have landed at Singapore’s Changi Airport or returning from the Causeway Link from Malaysia.

Ban Applicable To Singaporean And Foreigners

In the past, the law passed was not applicable to foreigners who had the privilege to bring in 400 sticks of cigarettes, approximately 20 packets, without getting a fine. This was quite a normal rule among Asian countries. Unfortunately, there has been a recent change, and now even foreigners have to adhere to the same rules as Singaporeans – the allowance of just one open pack of cigarettes.


One of my Japanese friends came over to Singapore last month and he brought 3 packets of cigarettes with him. He failed to declare while going through the customs since he thought the quantity was too small to violate the law. He ended up paying S$400 for the other 2 packets of cigarettes. Be careful of you are bringing in cigarettes. Even you are lucky with the customs, you can still be caught for violating the law if your cigarettes do not have health warnings signs or SDPC markings. In order to pass down messages to smokers that smoking is bad for health, the Singapore government passed down a new law on tobacco sales in July 2004. All cigarette package needs to have health warning labels as shown above (One of the example) if to be Since July 2004, Singapore has implemented a new policy on cigarettes sales.
Photo Source: The Noisy American

Implementation of this labels also stopped cheaper cigarettes smuggled from neighboring countries like Malaysia and Indonesia, but it did not last long as imitation versions came soon after. Just recently, the Malaysia government has also declared that cigarette package need to have health warning labels as well.

Singapore started the implementation of the health warnings on cigarette boxes since July 2004. The warnings are required to cover 50% of the front and 50% of the back of all packages. In 2003, a set of six warnings were rotated on cigarette packages and in 2006, a new set of 6 warnings were put in place. A third set of picture warnings for smoke tobacco products have been proposed, and are expected on packs in 2013. 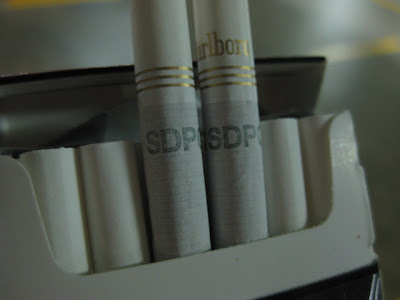