Singapore has been battling to keep drugs out of the country since independence and in 1973, the law is enacted to punish those that break these laws with heavy punishments including long term imprisonment, canes and capital punishments.

So what does these drug addicts do ? They abused medication by taking them excessively to resemble the “kick” they have while taking drugs. Of course, when there is buyers, there will be sellers as well.

Recent case that one register pharmacist, William Woo Tat Meng, sole proprietor of Community Pharmacy at Bukit Timah Plaza who illegally sold codeine-based cough syrup to customers with falsified records to keep his bad deed under the radar of the law enforcement. But soon his act is caught after HSA officers stopped a 42-year-old man on 23rd April 2015 at 3pm where he has procured 14 bottles of 120ml Dhasedyl syrup which he paid 20 dollars for each bottle.

“Codeine is a pain reliver and cough suppressant which is a relatively mild opiate. It is often found in prescription strength cough syrups, or in a combination formulation with various other analgesics (for example, with acetaminophen). However, it is also often abused due to its euphoric side effects and an addictive drug with potentially dangerous effects at high dosages.”

He sold 220,440 bottles containing more than 2,450 litres of Dhasedyl syrup to customers over a period of nearly two years, from May 2013 until April 2015 when he was caught red-handed. He has made a profit of at least S$ 244,529 from selling the syrup. However, he has admitted that he has been selling Dhasedyl syrup for about 10 years.


Under Singapore Poisons Act, pharmacists are not allowed to sell more than 240ml of codeine cough syrup to a customer at any one time. They also have to record the name and identity card number of the customer, and the quantity of codeine cough syrup sold daily in a book that is kept solely for this purpose.

The 58-year-old sole proprietor was jailed for eight months and three weeks, becoming the first pharmacist to be found guilty of improper selling of codeine under the law.

Under the Poisons Act, offenders could have faced up to two year’s in jail and a fine of up to $5,000 per charge.

Where Can Drug Addicts Seek Help ?

Usage of abusive drugs is not only about breaking the law but also destroy yourself and lives of your loved ones. You can save yourself or your loved one by winning the battle against drugs. It is never too late to seek help and recover from drug addiction.

The following organisations can help you or your loved one to overcome the toxic influences of drugs and get you back to track with your normal life. 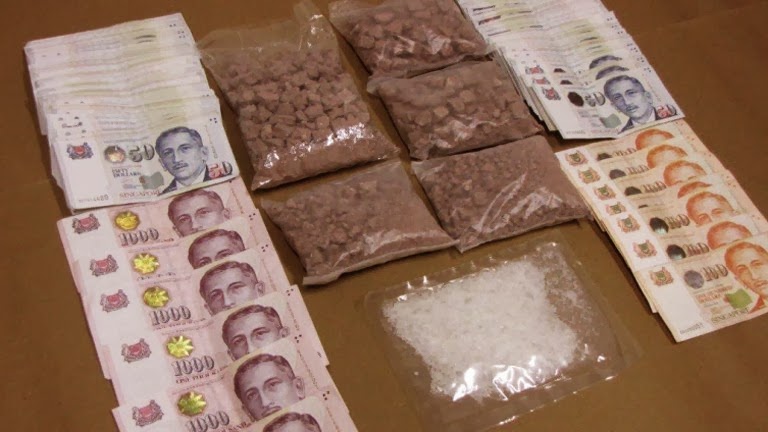 Singapore is trying to keeps its image as a clean city and low crime rates, they have taken strict measures to prevent drugs being smuggled or trafficked in Singapore, especially when drugs is on a prominent note in neighboring countries like Malaysia, Indonesia and Thailand.  Moreover, other controlled drugs are being classified into Class A, Class B or Class C which will constitute to life imprisonment or caning. To be consider as trafficking under the Singapore Law, below are the stated quantity level if proved to be in possession with:

The table below shows the list of controlled drugs and their offences based on Singapore Law. It is not limited only to trafficking, but as well manufacture of the drug or its salt, import or export of them.


In 2012, a surprise move was taken by the government by announcing its plans to amend laws that dictate mandatory death penalty for drug traffickers and the new bill was passed down soon after with little opposition, The proposed new law give the court discretion to sentence convicts of drug-related crimes to life imprisonment and caning if they cooperate with the authorities in “substantive way”.

Yong Vui Kong, a Malaysian, becomes the first person to be spare the gallows after the implementation of the new drug rules whom is sentenced to hang in 2009. Yong was caught in 2007 in Singapore when he was 19-year old and was charged with trafficking 47.27 grams of heroin. A judge ruled him as a drug courier instead of a major supplier or distributor for drugs which reduced his sentence to life imprisonment and 15 strokes of cane.